I heard one college girl say to the other, as I was coming down the stairs from the other direction. I work at a university here in Atlanta. Hearing that made me feel kinda old, to be honest.

See, I’m an actual 90s kid. As in, one born in the 80s. I was — and still am — too young to appreciate Nirvana (though I admit to being in the minority of my cohort). I went to elementary and middle school through the 90s and attended high school and college in the early 2000s.

This was a time before Youtube. Before instant streaming. But I don’t wanna talk about that. I wanna talk about “Everything Sucks.” Everything Sucks is a new show on Netflix about a group of kids going to high school in the 90s. It is a perfect encapsulation of my adolescence. Love, lust, hate, joy, depression. Everything is there. Even — sort of — grunge. Here’s the thing a lotta folks don’t understand: Grunge was for Generation X. That’s why the aesthetic is all over the movies of Kevin Smith, the movies of the 90s.

How do you spot a 90s movie? All the long-haired dudes in flannel. But those were films for and about college-aged people in the 90s. People who went to elementary and middle school in the 80s. People who caught the first episodes of GI Joe and Transformers waaaaaaaaaaaay back when they first aired.

My generation’s childhood introduction to Batman came via Michael Keaton and the amazing Bruce Timm and Adam West, not reading The Dark Knight Returns.And that’s what the writers of Everything Sucks seem to understand so well. It wasn’t just about grunge. Grunge was on the periphery. It’s what our older brothers/cousins were into, while we listened to Tupac and Britney Spears and watched Clarissa explain it all. Though honestly Tupac was a bit before my time too. He passed in the mid-90s, somewhere around 5th grade.

Everything Sucks is set in the town of Boring, Oregon in the year 1996. A small American town. Racism is somewhat invisible here, much as I remember. But homophobia is still in its heyday. Matthew Shepard’s murder is still two years away. Columbine is three years away. The first season of the show has dealt with growing up in a single-parent home, the pain of suicide and divorce, and the isolation that comes from knowing you’re different from everybody else.

This movie focuses a lot on the so-called outsiders. The drama geeks — actor and tech — that I spent a lot of my high school time hanging around. (I always felt they were way too cool for me, though I was sort of one of them. More on that later.)

I see a lot of myself in two of the characters: McQuaid, the undiagnosed Aspie who can’t tell his crush is not actually interested in him, and Tyler, the eager, barely pubescent, chronic outsider who just wants to be accepted by the cool kids. Granted, Tyler’s a bit more demonstrative than I ever was around the opposite sex (though then again I did have this annoying habit of telling every pretty girl I knew that I thought she was pretty, as if that would somehow translate into a relationship?). 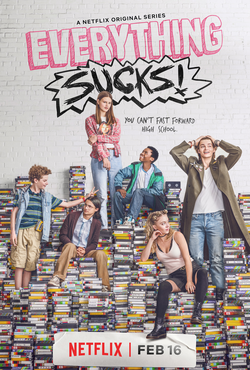 Everything except this show…

Anyway, awkwardness aside, I just can’t stop gushing about this show. I found so much that was relatable. Long bus rides full of excitement. Longer bus rides when everyone was sick and tired of being around each other. CHURCH CAMP. The unapproachable hottie who is actually way more normal than you think.* The gay kid who gets called a d–e in the first episode.

Oh, did I forget to mention the casual homophobia? This show has very little of it, but it’s creeping in the background. It’s the dark undercurrent of the 90s. So many kids with feels they couldn’t express from fear. Shear fear of being mocked, teased, threatened, beaten. I witnessed some of this firsthand and heard about it secondhand from good friends who received death threats for being out while in college. For my part, I’m straight. My mother might be considered ahead of her time. She never let my brother and I use those words that got bandied about on the playground, in locker rooms, and just about everywhere else. You know the words. I censored one in the first paragraph.

Why am I harping on this? Because one of the main characters is discovering her identity as an LGBT person. She’s not sure what her label is but she knows what — and who — she likes. So far, only three other members of the cast know. One is an ex-boyfriend she dated only to head off the teasing she was getting. One is the girl she likes who reciprocates her feelings. One is the boy with a crush on the girl she likes (see what I mean about ALL THE FEELS?).

But her dad? He remains oblivious. He’s the principal. He seems like a nice guy. But I am still nervous to see how he will react when she comes out to him. In 1996. One year before Ellen comes out. Two years before Matthew Shephard. Three before Columbine. A little less than 20 years before the Supreme Court declares laws prohibiting gay marriage as being unconstitutional. Even in 2018, LGBT teens make up a disproportionate population of homeless, abused, and unemployed Americans.

Don’t get me wrong. This show has its share of drama, but it is hilarious. There are moments in every episode when I roared with laughter. When Tyler bemoans his supposed friendless status yet can’t tell the conservative Christian girl Leslie totally wants him. When Luke has to come up with and simultaneously defend his movie pitch to the drama club on the fly. Banana slug.

But despite all the humor, IT’s always there. In the background. Lurking in the shadows. The unspoken threat. That love which dare not speak its name.

Oh yeah. Remember when I said I always thought the drama kids were way too cool for me? Well, my main reason for that is there were these guys in the drama club/classes who were always surrounded by beautiful girls. They were hilarious, always cracking jokes. I assumed they were the most popular kids at school. But there was one thing I always thought was a little odd. They all had the same accent. Not a Chicago or Savannah or New York accent, no. I’m talking about a more Nathan Lane way of speaking.

Were they gay? I don’t know. As a rule, I’ve never gone around asking people if they’re gay. Even when my friends hang up calendars filled with half-naked firemen, I make no assumptions unless they tell me directly. But that’s not the point. The point is I never once saw a gay couple at my high school or in college or even on television (though LGBT couples were first starting to get representation in mainstream media around the mid-90s). Why not? Were they closeted? Were they ashamed?

As a practicing Catholic, I’m not quite liberal enough to be a full ally to the LGBT movement. Good example: I’ve been leaving off the “Q” whenever I’ve used that acronym. But I voted against the amendment to the Georgia constitution officially defining marriage as being between one man and one woman. I just couldn’t abide that. I still can’t. There are some things society and the government just isn’t allowed to do. Telling folks who they can marry is one of them.

This is a personal issue for me. I have LGBT friends and family. I don’t agree with everything they believe. I don’t support everything they do.But I will always fight for them. For their right to exist as free and independent members of an accepting society built around love and justice.

Anyway, we’ve gotten way off track, and I’ve yet to address the question burning in the hearts and minds of my younger readers. These are the Foo Fighters:

*Yes, normal is a real thing. I’ll explain what I mean in next week’s post, probably.

writes one short story every week